Roxburgh Group The US Presidential Election 2020 and Markets

I hope I find you safe and well.

The clocks went back last week and with it comes shorter periods of daylight.

It is important we all try and remain active and motivated over the coming months, as our desire to get out and about will be curtailed by Covid restrictions and of course the great British weather!

I have no doubt we’ll be as creative as we can to fill our time, and to ensure limited Groundhog Day scenarios.

I always like to try and provide something both relevant and informative in my communications, and in particular information we receive from our investment partners that I think is worth sharing.

The US Election is almost upon us, and with other factors currently influencing markets at home and abroad, I have provided information which I hope you will find to be of interest.

The US presidential election will take place next Tuesday, the 3rd November.

It is commonly believed the combination of policies employed by the next administration could significantly influence the US stock market, disrupting performance. But how likely is this?

In short, both equities and bonds thrived under both Obama and Trump. The US dollar also strengthened marginally under Obama and weakened marginally under Trump. The best performing sectors of the S&P 500 under Obama were consumer discretionary, technology and health care. Under Trump, the three best-performing sectors were the same. Under Obama, the two worst-performing sectors were financials followed by energy. Under Trump, the worst performers were the same (Gavekal). These two very different presidents had a marginal impact on markets; therefore, it hardly seems justifiable to agonise over likely results.

The expectation is that the result will be closer than the polls are currently predicting and if, as expected, the result is contested by Trump then you would expect to see some volatility at least in the short term. outperforming, regardless of political environment.

Consequently, it is anticipated that it will be earnings and monetary policy that drive shareholder returns and not the policies of whoever is sitting in the White House. 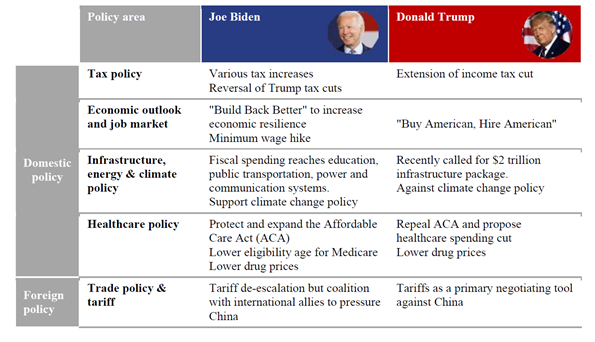 A perfect storm for global markets

Markets have recently reacted poorly to the threat of new lockdowns across Europe; with a pick-up in hospitalisation rates causing a number of policy makers to enforce stricter lockdown measures. This has come against the backdrop of ongoing and fractious Brexit discussions and ahead of the US Presidential Election on Tuesday 3rd of November. We are also hitting the busiest stretch of the earnings calendar in the US and Europe, with poor results from SAP (Cloud/Consulting Business) adding to the doom and gloom of market commentators this week.

Given the above, it is therefore not surprising to see some weakness in equity markets, with the FTSE 100 hitting a six-month low this week. Markets tend to hate uncertainty and this week has been something of a perfect storm, with the US Election in its final stretch and with news on the effectiveness of several vaccines, still several weeks away. As such, many investors are either sitting on the side-lines, or raising cash, and so markets are reacting more violently to the news flow around Covid-19 infections/lockdowns. Although, there are a number of reasons why remaining calm, and why investment managers are on the lookout for opportunities that may present themselves in the next few days/weeks.

We are entering a difficult stretch of the calendar, with Covid-19 infections rising, the threat of renewed lockdowns and political risk in the air. However, we should be mindful of what has transpired since the dark days of March, with both the policy response and economic recovery far exceeding expectations.  Whilst a return to lockdowns will undoubtedly blunt the economic recovery in the short term, low interest rates and abundant liquidity should provide a level of support for equity and credit markets, and investment managers will be using any correction to top up exposure to quality businesses that they intend to hold for a long time.

All further highlights the importance of having a diversified investment portfolio which invests across many different asset classes, as a well-designed investment plan ignores short-term market movements because it is focussed on the overall outcome, rather than the day-to-day ups and downs.